Recuperating from a short hospital visit to have my pseudocyst stented, inevitably helps my mind flow back to previous hospital stays. The most interesting of these was doubtless when I spent some time on Welwyn ward at the QEII hospital in Welwyn Garden City. Those with an encyclopaedia like recall of ward nomenclature might immediately start pointing a bony finger at me and screaming “But that’s a psych ward. Are you a nutter?” And, I with piffling disregard for their limited vocabulary rather than their Political Incorrectness, will stare them in the eye and say, “Yes, I have had moments where my mental health was in poor condition. What of it?”

Well actually, as well as being one of several turning points in my battle against alcohol, it was one of the most eye-opening times of my life. I had very early on passed on the opportunity to get into rehab on the NHS’s ticket. At the time it was offered to me, I was not ready to out myself as an alcoholic and so turned down what I would only later find out was an exceedingly rare offer.

Roll forward half a dozen years and my fight was fairly one-sided with the bottle ahead by several rounds. My wonderful GP – Susan Wakefield – was far from defeated and she suggested a spell in the psychiatric unit. To those around me i.e. my parents, we didn’t have to say anything else other than I was suffering from extreme stress. After all I was! Whatever the precise circumstances, I was, in 1994 admitted to Welwyn ward. Welwyn is the secure unit and it standard procedure to put anyone who little is known about on there. Although I was locked in, I was there voluntarily and free to leave at any-time. However, I would find that I quickly became highly dependent on the unit and hated leaving it.

On my first night I went through the usual admittance procedures and was met with tea for the first time. 25 years later is still amuses me that tea on the psych ward was sandwiches and soup. I mean sandwiches yes but watching a couple of dozen people withdrawing or suffering from a range of other conditions that affect the nervous system, trying to eat soup is frankly hilarious. I should have kept my tea-shirts and then I could have told you what I had for tea every night.

The drug regime for alcoholics was simple. Temazepam liquid, slopped into a plastic pot with a hand almost as unsteady as mine. Precise measurement did not appear to be compulsory in those days. So I was lying in a fairly relaxed state when the noises of the night descended on me. At first it was just unintelligible screaming, the rattling of chains (Yes really), and the occasional breakage. Gradually though my mind began to put the jigsaw together and the following day I filled the gaps. Every couple of weeks this chap we’ll call John, from the local travelling community, liked to go large on the stout. It always ended up with him being sectioned for 24 hours and dragged literally kicking and screaming to Welwyn ward. I met a subdued John the next day and apart from having the most piercing blue-eyes that must have 2000 year old roots in the Romani community, and being built like a brick shithouse, he was a truly nice guy. The same could be said of all my fellow travellers on Welwyn ward; at least the ones I was able to communicate with.

These included a young lad of 17 who, if what I was told was true, had taken one single ecstasy tablet and fried half his brain for ever. A girl next to me had post-natal depression. Oh my, those words disguise a malaise so ingrained in her psyche it was heart-wrenching. You might as well call a fractured skull, a slightly cracked head. Another girl, possibly the first person with an eating disorder I had knowingly met, looked like she might blow away if I sneezed. They weighed her several times a day; they weighed everything she ate; they weighed everything she defecated. They may have been force-feeding her, the screaming at meal-times certainly wasn’t pleasant. Some of the others, I couldn’t tell you much about. I understood what a “1000 yard stare” was for the first time. I learnt much that first spell on Welwyn and yet, had a million more questions when I left than when I went in.

One question was, “What year is this?” At one end of the corridor that ran along the spine of the ward was a room that was literally chained and padlocked. It said ECT on the outside. I guessed the sign was old. I peered in through the smoked glass and saw a scene from the Marathon Man. The sign wasn’t old at all. 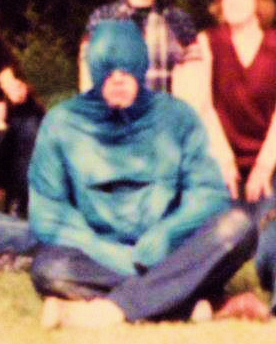 However it was just across the corridor in the last room on the outside wall of the building where I had my moment. This was the smoking room. A tiny little room not quite ten feet long and barely 4 feet wide. Smoking was restricted to this room, not in any early implementation of the 2007 Smoke Free places Act but rather to reduce the risk of us ‘inmates’ burning the place down. A few of my peers joined me in the room for short-whiles but most of the people on that floor were so spaced out by either their illness or their cure that even smoking was beyond them. I spent a lot of time in that room. The fug of Marlboro Red was sucked from the room by a tiny little fan built into the end window!

I can’t remember how long I had been sitting in that room when I first heard them. Voices. Not random sounds but distinct voices. Singing not talking. Wait. These are songs. I listened hard. They were definitely there. Very quiet but quite distinct. I leaned over and looked out of the window for a builder’s van but could see nothing. Anyway, they seemed to come from within the room.

I slept on it. The next day I returned to the smoke room and listened hard. There they were again. There was a pattern too. The same few songs being repeated on a cycle. What message were the aliens sending me?

Over a couple of days I began to work out what some of the songs were. That was Gordon Giltrap’s Sundown for sure. Maybe Eric Clapton. The aliens like AOR then. Do I need to tell someone? Think about it Steve. You are drying out on a secure psychiatric unit. So far your behaviour is good. Do you want to get sectioned? That ECT room didn’t look fun. Would they have a straitjacket in your size? Just keep listening. Eventually……something will make it sense.

And boom, it did. First I worked out WHAT I was listening too. It was a pre-launch tape for a new radio station (Possibly Heart in Hertfordshire). The same few songs being broadcast on a loop with the odd station ident in between.

More intriguing was the HOW. I should have guessed. We had been on similar territory before. Once on holiday at my Great Aunt’s in Gorleston we had returned from the beach to find her sitting down having a cup of tea, still in a state of shock. Apparently her vacuum cleaner had started talking to her. On investigation it seems a loose wire in said suction device meant she was picking up the trawler men. Now twenty years later, a straining fan built into the window of the smoking room on Welwyn Ward was doing a similar thing. It was receiving the test broadcast from Heart. Not that I was going to mention it to anyone anyway. People would think I was…..oh well, never mind.

One thought on “Crazy For You”