We were already music mad, the lot of us. Perhaps that’s why our friendship survives 40 plus years later. Maybe, when we listened to the radio, we harboured secret desires to be DJs but I don’t ever recall voicing it out loud. So when Mark suggested we start a pirate station it was a bit of a surprise.

Now I have to make a confession here. Key to our enterprise was an acquaintance of Mark who had all the gear and the technical know-how. I can’t remember his name for the life of me and I never particularly liked him though without him Twilight Radio would never have happened.

Yes Twilight Radio, not Radio Twilight, we were insistent it had to be that way round, was for about six weeks in the summer of 1982, the best radio station in Waltham Cross. A very, very small part of Waltham Cross as even with the transmitter on the top of the precinct multi-storey car park, the range was a couple of hundred yards. But that’s not really the point is it.

We didn’t broadcast live. We used to go round Mark’s mum and dad’s house in the week and tape the shows to play back on Sunday night. This was good because Mark’s parents were incredibly hospitable to us. Fine with us smoking in the house, no problems with us drinking, a plate of sarnies every time you walked through the door. We watched all our televised football there. It was also a convenient 2 minute walk through an alleyway to the Temple Bar. A perfect radio station studio. 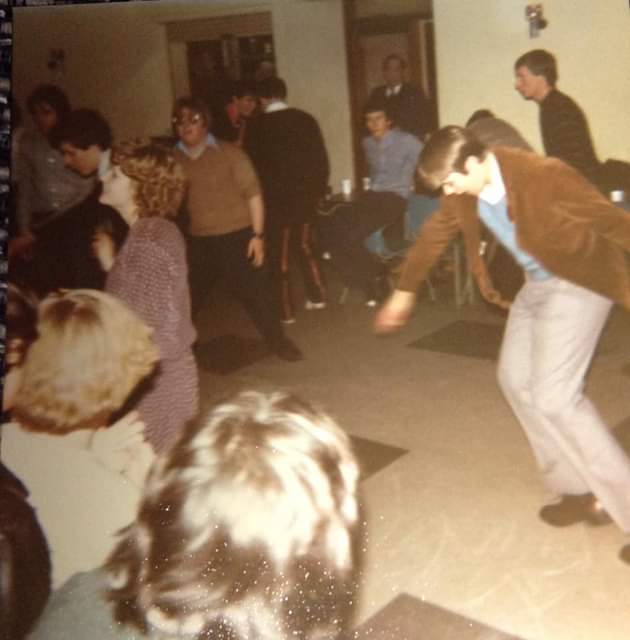 So who were we? Well Steve Knaggs became Alan Carter. Named for the heroic Eagle pilot in Space 1999, Steve…um Alan, broadcast punk and new wave as far as I can recall. I think Mags (Andi) must have had a similar show. I don’t recall precisely because whilst the others were recording their shows the rest of us fucked off round the Temple Bar. You know this because occasionally our broadcasts will be interrupted by someone coming back from the pub, usually loudly. Mark also did a show though I remember him more for an exchange on my show which regrettably I have on tape. We both sound as gormless as any parody of a local radio DJ ever.

So, egoistically or perhaps logically, it’s my own show I remember most of all. As even back then I had very broad musical tastes I decided I would have a general oldies show. I chose Pink Floyd’s Interstellar Overdrive as my theme tune/intro. All these years later it is still good choice. A great sound, goes on for ever when you need to fill time and being instrumental you can talk over it as much as you like.

I renamed myself Steve Earl, the surname coming from the record Duke of Earl (recently a hit for Darts but originally a hit for Doo Wop star Gene Chandler, who himself had recently been back in the charts….enough of this sidetrack nonsense). Clearly an up and coming American country rock guitarist caught wind of my name as he stole. Though Steve Earle did stick an extra vowel at the end to avoid me suing him.

I tried to have a hook or theme for each show. I remember one was based on a tour of the US so I played New York Shuffle, Daytona Demon, Way Down Yonder In New Orleans etc. I also tried to play records for artists who were celebrating their birthdays. Like so much in my life, the idea was good but the delivery left a little to be desired!

I did make recording history on one show. I played the only known instrumental version of the Eagles’ Hotel California. Actually, I had a loose wire on one channel and the vocals on that song are all mixed to one side so didn’t get broadcast.

Despite not actually being a live show, we tried to maintain the pretence we were. You often heard us talking about “next Monday” only hastily correcting ourselves to “tomorrow”. We also gave out a telephone number so that listeners could call us. First it was Henry’s house but later we changed it to a telephone box in Park Lane, Waltham Cross right outside the Plough’s pub garden. Here we sat with our radio on, listening to the playback and waiting for the phone to ring. I think over the entire six weeks (or maybe it was eight) we got approximately, no make that precisely, no phone calls.

In fact, if truth be known, we got no listeners, other than very close relatives of the guy who set up the equipment for us. Well so he said.

It was this lack of listeners that led us to do something pretty stupid for our last show. CB was all the range in the late seventies and early eighties and our technical guy had a rig in his car. So on the last night we drove around Waltham Cross and Cheshunt playing the tapes through a popular CB channel. We pissed a lot of people off that night and I was grateful we hadn’t handed out promotional cards with our photos on. Even so we steered clear of pubs where CBers drank for years after that.

So, Twilight Radio was of no use to anyone but ourselves but I don’t regret doing it for a minute. It was a lot of fun, and Mark’s mum’s sandwiches were always delicious.

This blog is dedicated to Garth, who always helped us eat the sandwiches. Rest In Paws!